Wow.  That's about all I can say.  Yesterday was possibly the best day of my life since I started getting Cushing's symptoms, and that was over 25 years ago.  A quarter of a century of feeling exhausted, fatigued.  A quarter of my life spent taking naps and sleeping.

Last week  in this post I wrote in part:

I went to the endo yesterday.  Nothing has changed for me.  Nothing will.  He wants me to take more cortef.  I don't want to gain weight again.  He looked up Provigil and it's not indicated for panhypopituitarism.  So he won't prescribe it.  My kidney surgeon probably won't let me take, anyway, but it was worth a try.

He did mention that in "only" 2.5 years maybe I can go back on growth hormone.  I don't want to live like this another year let alone 2.5.  But then, when I was on GH before it didn't help me like it helps most everyone else.

I'm tired of catering to a kidney that may or may not fail sometime anyway, tired of being so exhausted all the time.  I feel like I've lost nearly half my life to this Cushing's stuff already.

So, yesterday I was supposed to go to a conference on web design for churches.  My church sent me because they want me to spiff up their site and make them a new one for Christmas.  I wanted to go because, well, I like learning new stuff about the web.  I figured that I would learn stuff that would also be useful to me in others of my sites.

But the amazing thing is this.  My son had told me  about a medication that was very similar to Provigil, that he had tried it while he was writing his doctoral thesis and it had helped him.

So, having tried the official doctor route and being rebuffed - again - I had decided to try this stuff on my own.

Just the night before I had written a response on Robin's wonderful blog that reads in part:

I hate this disease, too.

I was just talking to a friend today about how I'd try nearly anything - even if it ruined my one remaining kidney - to have a few days where I felt good, normal, where I could wake up in the morning rested and be able to have energy for the day.

I want to go out and have fun, to be able to drive for more than 45 minutes without needing to rest, to be have people over for dinner, whatever. I hate being restricted by my lack of energy.

My endo says to cheer up. In two and a half years I can try the growth hormone again. Whoopee. Didn't work the first time and maybe gave me, or contributed to, cancer growth. Why would I want to look forward to trying that again?

I hate that this disease kills but I also hate that it's robbed me of half my life already.

I wish doctors would understand that even though we've "survived", there's no quality of life there.

As I said earlier, I have a history of daily naps of at least 3 hours a day.  It cuts into everything and prevents me from doing many things.  I have to schedule my life around these naps and it's awful. 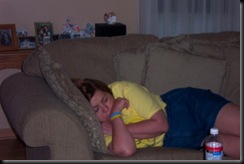 A few years ago I went on a Cushie trip to Rockford.  I've been there a few times and it's always so much fun.  But this first year, we were going to another Cushie's home for barbecue.  I didn't drive, I rested in the back of the car during the drive.  We got there and I managed to stay awake for a little while.  Them I put my head down on the dining room table and fell asleep. Our hostess kindly suggested that I move over to the sofa.

So, I have a long history of daily naps, not getting through the day, yadda, yadda.

So, I was a little nervous about yesterday.  I really wanted to go to this conference, and was afraid I'd have to go nap in my car.

I got up at 5:30 am yesterday.  Before I left at 7:15, I took my Cortef and then I took my non-FDA approved simulated Provigil.  (Although it's not FDA approved, it is not illegal to possess without a prescription and can be imported privately by citizens)

I stayed awake for the whole conference, went to a bell rehearsal, did Stacey's interview, had dinner and went to bed about 10:30PM.  NO NAP!  I did close my eyes a little during the 4:00PM session but it was also b-o-r-i-n-g.

I stayed awake, I enjoyed myself, I learned stuff, I participated in conversations (completely unlike shy me!).

I felt like I think normal people feel.  I was amazed.  Half my life wasted and I finally (thank you Michael!) had a good day.

My kidney doctor and my endo would probably be appalled but it's about time that I had some life again!  Maybe in another 25 years, I'll take another pill.  LOL