What's Wrong with Me? Sharmyn's Story

MaryONote: This article has been on the main site at http://www.cushings-help.com/media_sharmyn.htm for many years but the original link to the Woman's Day article is broken so I'm including the PDF file at the end of the article. Since this article came out, Sharm has also been the subject of some TV shows and appears in YouTube videos.

What's Wrong with Me?

I'd never heard of Cushing's disease, until it was revealed as the culprit behind my mysterious illness 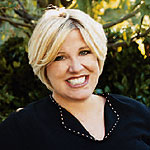 For years I was a size two. I worked hard to maintain my weight by exercising and eating a healthy diet—I even had a personal trainer. But in 1993, at the age of 31, my body rapidly changed. In four days I gained 11 pounds, and by six months it was 85. I tried eating less and working out more, but my weight just kept going up.

One year and 100 extra pounds later, my appearance was drastically changed. With most of the weight centered around my stomach, I looked as if I were pregnant with twins. My face and chin were round and the back of my neck had a buffalo hump. On top of it all, my thick blond hair began falling out in handfuls.

The anxiety and depression were nearly unbearable. I was a 31-year-old woman with a 227-pound body living in Newport Beach, California, a town south of Los Angeles where there's no such thing as being too thin. Obesity just does not exist, especially among my peers. As an interior designer, I was often invited to social events, but I was so embarrassed by my appearance that I started avoiding them.

What was going on inside my body was just as troubling. I felt as if I'd had a triple espresso on an empty stomach. I was flying at top speed with constant jitters and chronic indigestion, rarely sleeping more than two hours a night. Mentally and physically, I was exhausted.

Searching for an Answer

While my girlfriends were busy planning their weddings and starting their families, I went from doctor to doctor hoping that someone would figure out what was wrong with me. In seven years, I sought help from more than 15 highly recommended physicians, as well as nutritionists, psychotherapists, an acupuncturist and a naturopath. Pleading my case as if I was on trial for a crime I did not commit, my closing argument was always the same: "I eat a healthy diet and exercise fanatically. This rapid weight gain, anxiety and depression is completely out of my nature."

Nearly ever doctor I saw, convinced that I was a compulsive overeater with a mood disorder, simply offered advice on dieting and exercise. "Maybe you just think you work out as often as Jane Fonda," was one physician's comment.

One doctor labeled me a hypochondriac, and another said I had too much yeast in my system. Over the course of seven years, I also heard that I had fibromyalgia, a spastic colon, acid reflux and a sleep disorder, was prediabetic and premenopausal. I endured painful and expensive medical tests, including two endoscopies, a colonoscopy, a bone marrow biopsy and multiple CAT scans and ultrasounds. I had my thyroid removed and ankle and knee surgery (due to the excess weight on my joints).

During this time, with my family living far away in Illinois, I relied on my friends for support. Many of them were helpful, but some just continued to drop subtle hints about the latest diets they had read about. As for having a relationship—anxiety, chronic muscle pain and uncontrollable diarrhea were just a few of the reasons I stopped dating completely.

As days turned into years, I knew my symptoms were getting worse. My mind was no longer sharp and quick, and I stuttered to complete even simple sentences. I was not sure how much more I could endure, but I was determined that my obituary would not read, "Obese woman dies of unknown causes."

I gathered all of my medical records and went to work studying every line. I found there was just one thing almost every doctor agreed on: My cortisol level was too high. In fact, it was three times the normal level for this hormone, yet none of the doctors felt that it had anything to do with my laundry list of complaints. By this point, I was fairly certain that it did.

Borrowing a friend's computer, I went on the Internet and typed in the word "cortisol." Up popped an article on Cushing's syndrome, a hormonal disorder caused by excessively high blood levels of cortisol, and there on the screen were every one of my symptoms. I couldn't believe it! Had I possibly diagnosed myself seven long years after my symptoms began?

Suddenly I remembered that I had seen the word "Cushing's" in a report from a clinic I'd been to four years earlier. Ironically, the doctors had ruled it out because my eyes weren't yellow and I didn't have mouth sores. Now my next step was to convince a doctor that I had this disease.

I'll never forget the day I was ushered into the office of endocrinologist Andre Van Herle, M.D., at UCLA Medical Center. I was prepared to once again plead my case. But without knowing anything about me, he simply shook my hand and said, "So you are here because you have Cushing's."

This was a doctor with more than 40 years of experience in diagnosing people with the syndrome, and he knew at first glance that I had the physical appearance of someone with the disorder. It was one of the happiest days of my life. I was overwhelmed with emotion, and tears streamed down my face. Most importantly, I realized I was not crazy and someone was willing to help me.

Dr. Van Herle and his colleague, Pejman Cohan, M.D., soon confirmed through blood tests that I did have Cushing's syndrome. In my case, as in about 70 percent of cases, the problem was a tumor in my pituitary gland that was causing the overproduction of the hormone adrenocorticotropin (ACTH). This hormone stimulates the body's adrenal glands to produce cortisol, the life-sustaining "fight or flight" hormone, which has many important functions. High amounts of cortisol, however, can wreak havoc, causing rapid weight gain, upper-body obesity, a rounded face, increased fat around the neck, anxiety and depression. Over time, abnormally high levels can even be life-threatening.

The next step was surgery to remove the tumor in my pituitary, located at the base of the brain, but there was one more obstacle. Although my hormone levels indicated I had a tumor, it was apparently so small that it wasn't picked up on an MRI. So there was a chance that my surgeon, Daniel Kelly, M.D., director of UCLA's Pituitary Tumor and Neuroendocrine Program, wouldn't be able to locate it. Thankfully, he didn't encounter that problem. On April 14, 2000, Dr. Kelly was successful in removing the tiny tumor though an incision in the back of my nasal cavity.

Today, four years later, I am 100 percent cured, and my body and mind are finally free from the horrible effects of Cushing's. I've been able to lose 40 of the 100 pounds that I gained and am confident I can lose the rest. As a volunteer, I help facilitate a UCLA pituitary tumor support group, and I recently spoke to medical students at UCLA School of Medicine, explaining my difficulties obtaining a correct diagnosis. Looking back over nearly 10 years, it's painful to think about all that I've been through. But I am so proud of myself for never giving up. I hope my story will help encourage and empower other women to do the same.

Sharmyn McGraw is a member of the Cushing's Help and Support Message Boards.

Posted via email from Cushings Help