Multisystem Morbidity and Mortality in Cushings Syndrome: a Cohort Study

Dekkers O.M. et al.– To examine the risks for mortality, cardiovascular disease, fractures, peptic ulcers, and infections in CS patients before and after treatment.Cushing’s syndrome (CS) is associated with hypercoagulability, insulin resistance, hypertension, bone loss, and immunosuppression. To date, no adequately large cohort study has been performed to assess the multisystem effects of CS. It was concluded that despite the apparently benign character of the disease, CS is associated with clearly increased mortality and multisystem morbidity, even before diagnosis and treatment.
Methods
Results
From MDLinx
Posted by cushie at 9:57 AM No comments:

Early postoperative endocrine testing could predict lasting remission among pediatric patients with Cushing’s disease, according to recent study findings published in the Journal of Clinical Endocrinology & Metabolism. Other findings suggest early diagnosis has the potential to improve surgical outcomes due to an association with younger age, smaller adenomas and lack of dural invasion.
Researchers at the NIH included 200 pediatric patients (106 females, 94 males) with Cushing’s disease in the prospective observational study from 1982 to 2010. The mean age was 10.6 years (range; 4 to 19 years) at the time of symptom development and 13.7 years at the time of the NIH study. However, 27 (13%) patients underwent prior surgery at another institution, the researchers reported.
Using MRI, researchers identified adenomas in 97 patients (50%); when positive, the MRI accurately specified discrete adenoma in 96 of the 97 patients (99%). The researchers wrote that this was more accurate compared with adrenocorticotropic hormone (ACTH) ratios during inferior petrosal sinus sampling to influence adenoma lateralization (accurate in 72% of patients without prior surgery).
Moreover, 195 of the 200 patients (98%) demonstrated remission after surgery (189 [97%] were hypocortisolemic; six [3%] were eucortisolemic postoperatively). Factors associated with initial remission (P<.05) included identification of an adenoma at surgery, immunohistochemical ACTH-producing adenoma and noninvasive ACTH adenoma.
According to researchers, younger age, smaller adenoma and absence of cavernous sinus wall or other dural invasion were associated with long-term remission (P<.05). Finally, minimum morning serum cortisol of less than 1 mcg/dL after surgery also demonstrated a positive predictive value for a lasting remission of 96%, the researchers wrote.

Disclosure: The researchers report no relevant financial disclosures.
Posted by cushie at 9:56 PM No comments:

Also, they are interested in sharing others of our posts from April.  Please let me know if I have your permission to share your blog post(s) with them.  I won't without your permission.

Depressed Mood and Other Psychiatric Manifestations of Cushing's Syndrome: Relationship to Hormone Levels

Thirty-five consecutive patients with Cushing's syndrome were studied prospectively prior to treatment.

The implications of the similarities in psychiatric manifestations between Cushing's syndrome and the primary affective disorders are discussed.


Find them all (or add your own) here: Cushing's Helpful Doctors
Posted by cushie at 8:18 PM No comments:

This Blog Isn't About Dogs...

...and none of the Cushing's Help family of sites is, but if you're looking for information about Cushing's in dogs, this looks like a great place to start:

What Have Last Year's Cushie Bloggers Been Up To?

We're still taking names and URLs for this year's Cushings Awareness Challenge but as you can see from the post below, most of last year's bloggers are still active...

More at http://www.cushie.info/
Posted by cushie at 2:54 AM No comments:

The Latest on the Cushing's Help Message Boards

Check them out at http://cushings.invisionzone.com/ 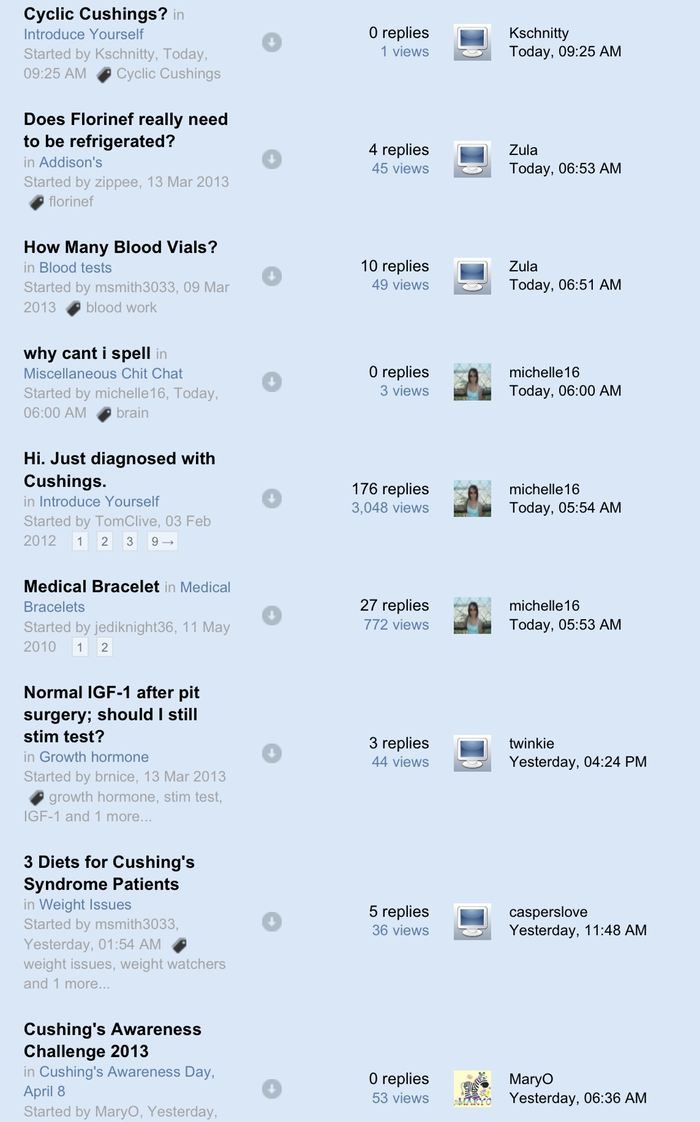 Posted by cushie at 1:44 PM No comments:


Do you blog? Want to get started?

All you have to do is blog about something Cushing's related for the 30 days of April.

Robin designed this year's version of our "official logo" to put on your blogs.

If your blog wants you to upload an image from your desktop, right-click on the image above and choose "save-as". Remember where you saved it to!

To link to the image with the yellow border, use this URL: http://www.cushings-help.com/images/challenge-2013b.jpg

To link to the image without a border, use this URL: http://www.cushings-help.com/images/challenge-2013nb.jpg

In all cases, the URL for the site is http://www.cushings-help.com

Please let me know the URL to your blog in the comments area of this post or and I will list it on CushieBloggers ( http://cushie-blogger.blogspot.com/ )

The more people who participate, the more the word will get out about Cushing's.

Suggested topics - or add your own!

In what ways have Cushing's made you a better person?
What have you learned about the medical community since you have become sick?
If you had one chance to speak to an endocrinologist association meeting, what would you tell them about Cushing's patients?
What would you tell the friends and family of another Cushing's patient in order to garner more emotional support for your friend?
Challenges with Cushing's? How have you overcome challenges? Stuff like that.
I have Cushing's Disease....(personal synopsis)
How I found out I have Cushing's
What is Cushing's Disease/Syndrome? (Personal variation, i.e. adrenal or pituitary or ectopic, etc.)
My challenges with Cushing's
Overcoming challenges with Cushing's (could include any challenges)
If I could speak to an endocrinologist organization, I would tell them...
. What would I tell others trying to be diagnosed? What would I tell families of those who are sick with Cushing's?
Treatments I've gone through to try to be cured/treatments I may have to go through to be cured.
What will happen if I'm not cured?
I write about my health because...
10 Things I Couldn’t Live Without.
My Dream Day.
What I learned the hard way
Miracle Cure. (Write a news-style article on a miracle cure. What’s the cure? How do you get the cure? Be sure to include a disclaimer)
Health Madlib Poem. Go to http://languageisavirus.com/cgi-bin/madlibs.pl and fill in the parts of speech and the site will generate a poem for you.
Give yourself, your condition, or your health focus a mascot. Is it a real person? Fictional? Mythical being? Describe them. Bonus points if you provide a visual!
5 Challenges and 5 Small Victories.
The First Time I...
Make a word cloud or tree with a list of words that come to mind when you think about your blog, health, or interests. Use a thesaurus to make it branch more.
How much money have you spent on Cushing's, or, How did Cushing's impact your life financially?
Why do you think Cushing's may not be as rare as doctors believe?
What is your theory about what causes Cushing's?
How has Cushing's altered the trajectory of your life? What would you have done? Who would you have been?
What three things has Cushing's stolen from you? What do you miss the most? What can you do in your Cushing's life to still achieve any of those goals? What new goals did Cushing's bring to you?
How do you cope?
What do you do to improve your quality of life as you fight Cushing's?
Your thoughts...?
Posted by cushie at 7:10 AM No comments:


November 7, 2012 The US Food and Drug Administration's (FDA) Endocrinologic and Metabolic Drugs Advisory Committee (EMDAC) voted unanimously in support of the use of Signifor® (pasireotide) for the treatment of patients with Cushing's disease who require medical therapeutic intervention. The recommendation was based on data from clinical trials of pasireotide, including PASPORT-CUSHINGS (PASireotide clinical trial PORTfolio - CUSHING'S disease), the largest randomized Phase III study to evaluate a medical therapy in patients with Cushing's disease.

For more information, or to speak to a Patient Assistance NOW Endocrinology representative, please call 1-877-503-3377 (select option #3 for SIGNIFOR) Monday to Friday 8 am - 8 pm ET.

Orphagen has identified and characterized small molecule antagonists to steroidogenic factor-1 (SF-1). SF-1 binds to and regulates DNA promoter elements in the major transporters and enzymes required for adrenal steroid synthesis. It is also required for development of the adrenal gland. SF-1 antagonists inhibit cortisol secretion in adrenal cells and have potential application in two orphan indications, Cushing’s syndrome and adrenocortical carcinoma. In addition, SF-1 appears to have an important role in the progression of advanced prostate cancer.

Cushing’s syndrome: An estimated 20,000 people in the US have Cushing’s, with more than 3,000 new cases diagnosed each year. The incidence is similar in Europe. Cushing’s syndrome disproportionately affects females, who make up about 75% of the diagnosed cases. Symptoms of Cushing’s syndrome can include obesity, diabetes, psychiatric disorders, osteoporosis and immune suppression. Cushing’s syndrome is caused by elevated secretion of cortisol from the adrenal gland, in association with pituitary, adrenal or other cancers. Orphagen has identified small molecule antagonists to SF-1 that have the potential to suppress cortisol levels in all Cushing’s patients without serious side effects.

Adrenocortical carcinoma (ACC): ACC is a rare malignancy with an extremely poor prognosis (5-year overall survival: 37-47%). Complete surgical resection offers hope for long-term survival but surgery is not an option in up to two-thirds of patients because metastasis has usually occurred by the time of diagnosis. SF-1 is recognized as a potential mechanism-based therapeutic target for control of ACC and an SF-1 antagonist could be used in the treatment of ACC.

Castration resistant prostate cancer (CRPC): CRPC is the most common cancer in males. Surgery is not an option if the cancer has spread beyond the prostate gland, at which point patients typically receive hormonal therapy, essentially chemical castration. This course of therapy usually fails within two years, resulting in castration resistant prostate cancer (CRPC). Most patients eventually succumb to CRPC, which is the second leading cause of cancer deaths in men. SF-1 antagonists may: (1) block the adrenal androgens that circumvent chemical castration, and are a primary cause of CRPC; and (2) inhibit synthesis of androgens within the prostate tumor itself, where SF-1 may control induction of enzymes for de novo androgen synthesis in treatment-resistant cancers. From http://www.orphagen.com/research_cushings.html
Posted by cushie at 6:30 PM No comments: