(Pituitary) Brain Surgery Through the Nose 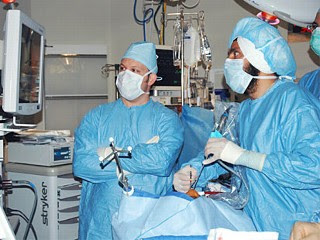 A survivor of brain surgery, Kellie Graham considers herself lucky because she was diagnosed early, because she received advanced medical care and because she had a type of tumor that could be removed through her nose.

Graham had a tumor at the base of her brain, a pituitary tumor that was removed via a relatively novel technique known as endoscopic brain surgery. In this procedure, an endoscope is put through the nasal passages and an incision is made in the back by an otolaryngologist -- an ear, nose and throat surgeon -- and then handed off to a neurosurgeon to remove tumors at the base of the brain.

"I felt really comfortable with it because both physicians explained to me exactly what they were going to do," said Graham, describing how she felt after she learned about the surgery.

She also was aided, she said, by the reassurances of a friend who had undergone a similar operation before.

"That was probably why I was not as apprehensive as I could have been," said Graham.

While the surgery treats a serious condition, surgeons who perform the operation say it is a more optimal treatment than some of those previously used.

"You're going through the nose, you're doing some dissection, but your tumor's right there," said Dr. Ameet Singh, an otolaryngologist and co-director of endoscopic pituitary and skull base surgery at the George Washington University Hospital, who performed Graham's operation. "You save the patient not only a lot of pain, but a lot of time in terms of their recovery period."

The procedure is one of many that have progressed in recent years and offer less-invasive operations, such as kidneys that are removed through the belly button. It is performed at a number of medical centers.

"This is a technique that has grown over the past five years through a close collaboration between ENT surgeons and neurosurgeons," said Dr. Theodore Schwartz, a neurosurgeon at New York-Presbyterian Hospital and Weill Cornell Medical Center.

But while the particular operation Graham had was relatively novel, the notion of tumor removal through the nasal passages is not.

"The whole concept of removing pituitary tumors through the nose probably goes back to the 1960s -- it's probably been around 30 or 40 years," said Dr. Keith Black, director of the Cedars-Sinai Maxine Dunitz Neurosurgical Institute.

Brain tumors were initially treated by removing a piece of the skull, and in later years, procedures were done utilizing a microscope, which gave an enlarged view of the tumor and the surrounding area.

Black said that using the endoscope in place of the microscope presents a tradeoff -- advantageous in some aspects but a disadvantage in others.

With the endoscope, he said, the operation is a bit less invasive because the incision is made further back in the nasal passages.

At the same time, he said, "The disadvantage of the endoscope is that, with an endoscope, you're relying on a camera to look at the image."

In such a situation, he said, some depth perception is compromised, even with improved cameras that have higher definition.

Endoscopic brain surgery is not available for all tumors in the brain, just those at the base.

Tumors like gliomas -- the type of tumor that afflicted the late Sen. Edward Kennedy -- would not be treatable with this procedure because they are located elsewhere in the brain.

As with any procedure, endoscopic brain surgery carries its share of risks.

One risk, noted Schwartz, was that of infection, given that the surgical tools need to pass through relatively dirty nasal passages into a sterile brain area.

"You need to be very meticulous [about] how you close the skull base after surgery to make sure the opening you made is well-closed," he said.

Also for that reason, said Schwartz, antibiotics are given to the patient.

But, he said, that type of complication is uncommon.

"They don't get infections at a high rate," said Schwartz.

In her own case, Graham said she was told she needed a lumbar drain placed at the base of her spine because of the potential risk of spinal fluid draining into her skull.

"You just do something in a precautionary manner so if there is a leak, you've already taken care of it," said Graham.

Black noted that one of the advantages of the surgery could prove to be a disadvantage, since the incision is further back in the nasal passages.

"If there's a major injury, if you get major bleeding, it's harder to control with the endoscope than the microscope," said Black.

He noted, however, that doing surgeries through the nose has provided benefits overall, even if he considers the endoscope to be only an incremental advance.

"That approach now is reserved for very large tumors that we cannot remove through the nose," he said.

At this point, he estimated, 97 percent of pituitary tumors are done through the nose, not by removing the skull.

Dr. Vijay Anand, an otolaryngologist who performs the operation with Schwartz at New York-Presbyterian Hospital, was more enthusiastic.

"It's a minimally invasive procedure with maximum benefits," he said.

Brain Surgery on the Ground

Lisa Klopp, a veterinary neurosurgeon at the Sams Clinic in San Francisco, learned from a neurosurgeon, who worked on humans, in order to perform endoscopic brain surgery on cats and dogs.

"One of the difficulties with doing brain surgery in dogs and cats is the size of the cranial vault," she said.

The endoscope, she said, has allowed her to fully remove tumors that she could not have fully accessed previously because she could not fully maneuver in the skull of the animal.

Graham said that the greatest benefit she received in preparing for the surgery was one not available to pets.

"The more information they can have about the procedure, it just really puts them at ease," she said of patients preparing for the operation.

In her own case, Graham said, the tumor had been pressing on her optic nerve, impairing her vision, and after the surgery, the main side effect she noticed was congestion.

Overall, she said, another of the prime benefits she received was excellent care from attentive nurses, something she said is not emphasized enough when people discuss health care.

"My situation was very positive," said Graham. "I'm glad it's over and I'm glad it turned out really well."