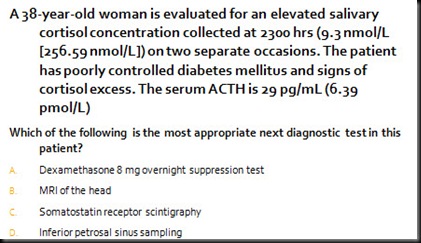 The patient has evidence of excess cortisol production based upon the 2300 hrs salivary cortisol test. Cortisol is cyclically produced, with nadir of ACTH and cortisol near midnight. This diurnal variation is lost early in the course of autonomous ACTH/cortisol production. Midnight serum cortisol is elevated in Cushing’s syndrome; however, hospitalization for collection of serum may be stressful and cause false positive results. Salivary cortisol is unbound and reflects the normal serum nadir – with ease of outpatient collection. False-positive results may occur, including contamination with corticosteroid-containing ointments. Many experts therefore recommend two or more screening tests, as in this patient.

The patient’s ACTH is within the normal range, which may indicate that the source of ACTH is a corticotrope adenoma, or may reflect ectopic production by a tumor. Extremely elevated ACTH concentrations would suggest ectopic sources; however, this is not a reliable discriminator. Ectopically produced ACTH molecules are often partially formed and are excluded from detection by current assays.

ACTH-dependent Cushing’s syndrome should be differentiated using one of several tests. The dexamethasone 8-mg (high-dose) overnight suppression test is performed as an outpatient. If the source of ACTH is a corticotrope in the pituitary gland, high-dose dexamethasone will suppress ACTH and cortisol production by at least 68%. If the source of ACTH is ectopic, suppression is negligible.

Another noninvasive test is the CRH stimulation test. Corticotrope adenomas respond to CRH, increasing ACTH by 35% to 50% over baseline. Cortisol concentrations rise by 20% to 50%. Nonpituitary tumors producing ectopic ACTH do not respond.

Localizing studies (MRI, scintigraphy, inferior petrosal sinus sampling) should never be performed before hormonal excess is confirmed. Incidentalomas in the pituitary (as common as 10% of studies) and / or adrenals (as many as 5% of studies) will confound the diagnosis.