Are doctors ever really off duty?

I found this article especially interesting.  This question was asked of a group of endos at an NIH conference a few years ago - if you saw someone on the street who looked like they had symptoms of fill-in-the disease, would you suggest that they see a doctor.  The general answer was no.  No surprise there.

Patients, if you see someone who looks like s/he has Cushing's, give them a discrete card.

This has been a concern of mine for some time. Your post spurred me on to do something I've been meaning to do. I've designed something you can print that will fit on the business cards you can buy just about anywhere (Wal-mart included). You can also print on stiff paper and cut with a paper cutter or scissors. I've done a front and a back. 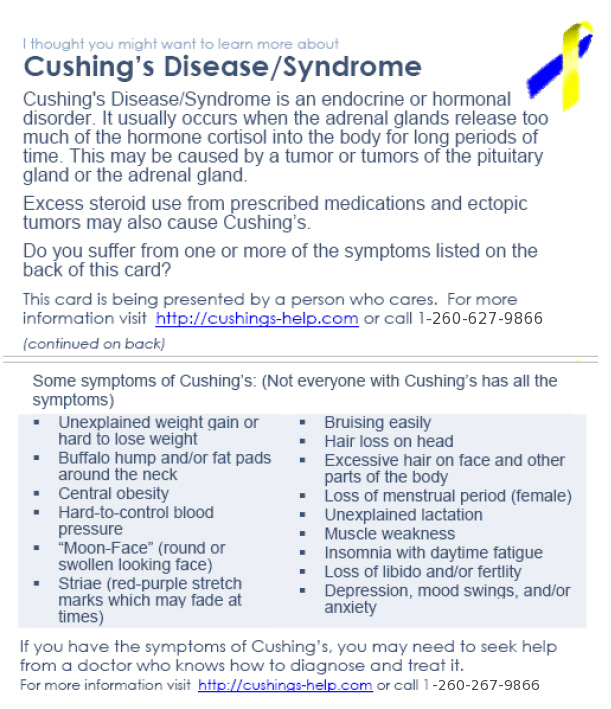 Here are the links:

• Front: This card is being presented by a person who cares.
• Back (The same for everyone)

This Topic on the Message Boards

And now, the article from http://www.guardian.co.uk/lifeandstyle/2009/nov/03/doctor-diagnosis-stranger:

Are doctors ever really off duty?

Which potentially serious symptoms would prompt them to stop and advise a stranger on a bus? 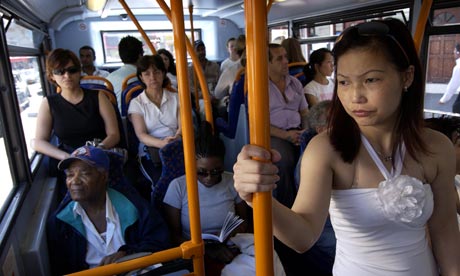 A Spanish woman of 55, Montse Ventura, recently met the woman she refers to as her "guardian angel" on a bus in Barcelona. The stranger – an endocrinologist – urged Ventura to have tests for acromegaly, a rare disorder involving an excesss of growth hormone, caused by a pituitary gland tumour. How had the doctor made this unsolicited diagnosis on public transport? Apparently the unusual, spade-like shape of Ventura's hands was a dead giveaway.

But how many off-duty doctors would feel compelled to alert strangers to symptoms they spot? "If I was sitting next to someone on a bus with a melanoma, I'd say something or I wouldn't sleep at night," says GP Mary McCullins. "We all have a different threshold for interfering and you don't want to terrify people, but this is the one thing I'd urge a total stranger to see a doctor about." So what other symptoms might prompt a doctor to approach someone on the street?

Cushing's syndrome is another rare hormone disorder which can be caused by a non-cancerous tumour in the pituitary gland. "A puffy, rounded 'moon face' is one of the classic signs of Cushing's," says Dr Steve Field, chair of the Royal College of GPs. "In a social situation, I wouldn't just say, 'You're dangerously ill' but I'd try to elicit information and encourage them to see a doctor."

When one pupil is smaller than the other, perhaps with a drooping eyelid, it could be Horner's syndrome, a condition caused when a lung tumour begins eating into the nerves in the neck. This can be the first obvious sign of the cancer. "I'd encourage someone to get this checked out," says Dr Simon Smith, consultant in emergency medicine at the Oxford Radcliffe Hospitals Trust. "People often have an inkling that something's wrong, and you might spur them to get help sooner."

Some people are born with club-shaped fingers, but if, over time, they become "drumstick-like", this could signify serious problems such as lung tumours, chronic lung infections or congenital heart disease. "Because it happens gradually, some people disregard clubbing," says Smith. "But I'd say something because it can be an important symptom in many serious illnesses."

Whitish yellowy lumps around the eyelids can be a sign of high cholesterol, a major factor in heart disease. Sometimes you also get a yellow circle around the iris. "I would suggest they got a cholesterol test with these symptoms," says Smith. "They can do something about it that could save their life."

A person with Addison's disease, a rare but chronic condition brought about by the failure of the adrenal glands, may develop what looks like a deep tan, even in non sun-exposed areas such as the palms. Other symptoms (tiredness, dizziness) can be non-specific so the condition is often advanced by the time it is diagnosed. Addison's is treatable with lifelong steroid replacement therapy. "If someone was saying they hadn't been in the sun but had developed a tan, alarm bells would ring and I'd probably ask how they were feeling," says McCullins.

Putrid smelling breath – even if the teeth look perfect – can be a sign of acute necrotising periodontitis. "I'd be able to tell when someone walks through the door," says dentist Laurie Powell. "But people become accustomed to it and don't notice." Untreated, the condition damages the bones and connective tissue in the jaw. It can also be a sign of other diseases such as diabetes or Aids.