Another Cushing's Patient has Died :(

I did not know Bonny personally but she was an Australian member of the Cushing's Help message boards who rarely posted.

She was only 45 at the time of her death October 12, 2009.  I've known far too many Cushies who have died far too young from this disease.

I was sick with ALL the symptoms (about 30-40) for 5 years. Finally got correctly diagonosed and had my left Adrenal Gland and its tumour removed in June 2007. The recovery was long and hellish. The worst symptom after the operation was 3 months of constant itching literally from my scalp to my heels and every inch of skin in between. I also had pain in every single joint of my body, along with all the pre op symptoms that took a long long time to improve.

Now two and a half years on, I have a second tumour... on the same side! No idea how that can be seeing as the gland is gone. My Endo is overseas so until he comes back I don't know much, but they are running more tests and I am waiting for a surgery date to go through it all over again!

All the symptoms are horrible, but last time I particularly hated the fractures (still have a few of those),as they made life so difficutlt and painful, but also relly hated losing half my hair, and the weight gain and moon face. Feeling awful is terrible, but when you add the things that make you look horrible too, its pretty hard to take.

As a single parent, (divorced), life is very hard with Cushings as you don't have anyone else to do the things for you that you cant do yourself, or help you with your own personal stuff. 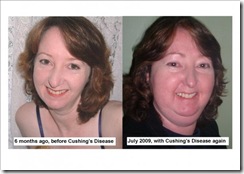 Before and after Cushing's pictures.

(I) lost a very strong, courageous friend to the very disease she suffers from.. your pain is gone now, Bonny.. Rest well and thank you for touching my life. ♥