The adrenal cortex produces glucocorticoids including cortisol which affect metabolism of carbohydrate, lipid and protein as well as mineralocorticoids in the form of aldosterone. Both steroid axes are controlled by negative feedback.

Traditionally, the incidence of Cushing’s syndrome is quoted as 1/250,000, with no specific geographical variation. However, more recent data suggest that 3–5% of all obese, hypertensive individuals with type 2 diabetes may have Cushing’s syndrome, and actually experience improve­ment in metabolic control following intervention1. Thus, clinicians should have a high index of suspicion in this patient group.

The commonest cause of Cushing’s syndrome is iatrogenic from administration of high doses of glucocorticoids.

Causes of Cushing’s syndrome are divided into two groups:

Figure 1: A hyperplastic adrenal gland taken from a patient with Cushing's syndrome. 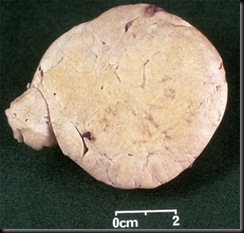 Figure 2: An adrenocortical adenoma from a patient with Cushing's syndrome. 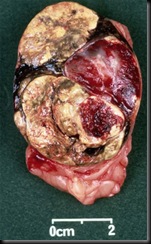 The predominant clinical features of Cushing’s syndrome are those of glucocorticoid excess as listed in the table below.

Presentation is common to all aetiologies, although syndromes caused by ectopic ACTH may be a little different. Pigmentation only occurs in patients with ACTH-dependent causes. Pigmentation is most marked with ectopic production of ACTH.

Typical features of ectopic ACTH production include pigmentation (due to melanocyte stimulating hormone production as a byproduct of ACTH synthesis), weight loss, hypokalaemia, metabolic alkalosis and hyperglycaemia. Classical features of Cushing's syndrome, especially weight gain, are often absent. As this tends to occur at a later age than Cushing's disease, if the syndrome develops later in life, a carcinoma should be excluded as an underlying cause.

Note: A cushingoid appearance can be due to alcohol excess (pseudo-Cushing’s syndrome). The pathophysiology of this is poorly understood.

Impaired glucose tolerance or even diabetes mellitus are common, especially in the ectopic ACTH syndrome. Patients also suffer from psychological disturbances where depression and anxiety are common.

Figure 2: A patient with Cushing's syndrome showing signs of acne and hirsuitism. 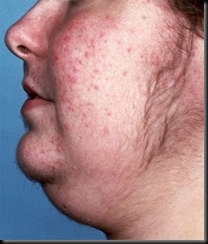 Figure 3: Striae in a patient with Cushing's syndrome. 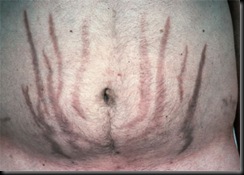 It is important to note that random cortisol measurements are of no value in the diagnosis of Cushing’s syndrome.

Oral oestrogens increase cortisol-binding globulin and therefore lead to falsely elevated serum cortisol levels. They should be stopped for six weeks before investigation. It would be prudent to involve a specialist should this situation occur.

The three main investigations to confirm the diagnosis of Cushing’s syndrome include:

In healthy people, serum cortisol is less than 50 mmol/litre following either test. The 48-hour test is more accurate.

Late-night salivary cortisol is an alternative to midnight plasma cortisol, with a slightly lower sensitivity. These samples are easier to obtain as do not require a hospital admission.

Urinary free cortisol – although this test is in widespread use it has a low sensitivity; at least three or four collections are required to avoid missing mild disease. The specificity is also poor as the cortisol levels obtained overlap those found in patients with depression or polycystic ovary syndrome.

Tests to diagnose the cause of Cushing’s syndrome

This can be very difficult as all causes can results in clinically identical Cushing’s syndrome. Differentiation can be difficult even by experts.

Following confirmation of Cushing’s syndrome, the next step is measurement of plasma ACTH.

If plasma ACTH levels are less than 5 pg/ml then a primary adrenal cause is likely. Imaging of the adrenals with CT or MRI is then the appropriate next step3.

If levels of ACTH are persistently more than 15 pg/ml then an ACTH-dependent pathology is likely and the patient will require further investigations as discussed below.

Levels of 5–15 pg/ml require cautious interpretation, because individuals with Cushing’s disease may have plasma ACTH of less than 10 pg/ml. At least two or three estimations are made, to avoid inappropriate classification.

Biochemical evaluation, rather than imaging, should be relied on to differentiate pituitary from non-pituitary sources of ACTH with the following tests:

This is the rationale for the high-dose dexamethasone suppression test. In about 80% of patients with Cushing’s disease, cortisol is reduced to less that 50% of the basal level.

CRH stimu­lates release of ACTH from the corticotrophs of the anterior pitui­tary. Patients with Cushing’s disease typically exhibit an excessive increase in plasma cortisol, whereas those with ectopic ACTH secretion usually do not.

If a pituitary source is likely, CT or MRI of the pituitary is the next investigation but sensitivity is not high.

However, around 40% of corticotroph microadenomas are not visualized with a MRI scan and ‘incidentalomas’ are found in 10% of the healthy population. Therefore biochemical assessment of patients is extremely important.

Bilateral inferior petrosal sinus sampling is a highly spe­cialised, invasive investigation, but is the most reliable test for differentiating pituitary and non-pituitary sources of ACTH.
Management

The cause must be addressed.

If the cause is iatrogenic, the prescription must be reviewed. There will be a medical need for the steroids but it may be possible to use "steroid sparing" drugs to reduce the dose. More than 7.5 - 10 mg/day (or equivalent in other steroids) may produce Cushings. It is dose-response.

Trans-sphenoidal selective microadenomectomy by an experienced surgeon is the treatment of choice in most patients with Cushing’s disease. Long-lasting remission without other pituitary hormonal deficiency is achieved in 50–60% of cases.

Following the operation, ACTH levels fall below normal. This is temporary, but hydrocortisone or prednisolone replacement must be given to avoid acute hypoadrenalism. Most patients can stop this replacement therapy in less than a year. A steroid card including education about intercurrent illness should be given to the patient.

Medical therapy to lower cortisol may be used in preparation for surgery or after unsuccessful surgery. It may also be used with pituitary radiotherapy. It is only rarely given long-term.

Metyrapone and ketoconazole are often used to inhibit cortisol synthesis. Metyrapone causes an increase in steroid androgenic precursors, and hirsutism is a major adverse effect in women; this does not occur with ketoconazole.

Where transphenoidal surgery has failed or in patients who are unsuitable candidates for surgery, radiotherapy is another possible treatment.

Progressive anterior pituitary failure is the major side-effect; growth hormone deficiency is present in almost all patients 10 years after treatment and gonadotrophin deficiency in about 15%. About four years after treatment, 80% of patients are in remission with respect to circulating plasma cortisol levels. Patients must be evaluated by specialist with regular follow up to identify deficiences early.

Surgery for adrenal adenomas is usually curative but carcinomas have a much worse prognosis. Adrenal adenomas are usually removed by a laparoscopic unilateral adrenalectomy4.

Micronodular or macronodular hyperplasia is usually treated by bilateral total adrenalectomy as leaving any gland will often lead to recurrence.

However, with treatment the results are very good unless there is underlying malignancy.

As many studies have shown that a relatively high number of diabetic patients may have unsuspected Cushing's syndrome, one study has even suggested that it may be worthwhile actually screening for Cushing’s syndrome may be feasible at the clinical onset of diabetes6. Clearly this would only be reserved for cases with a high level of suspicion.

Video 1: A summary of Cushing's syndrome occuring in children with discussion about the aetiology.

Video 2: A US based case history illustrating a patients journey through diagnosis of Cushing's disease to surgical treatment on her pituitary gland.

Association for Cushing's Treatment and Help: A support group for people suffering from all forms of Cushing's syndrome.

Author and reviewers competing interests: none.